The Inari Shrine in Kyoto is one of the most beloved shrines in Japan. The string of torii - the porticoes - is testimony to this: they stretch for several kilometres. These torii are offered to attract the blessing of Inari, god of rice and prosperity. In the distance, a priest approaches the photographer and the sacred walk comes to life for a photo.

Hans Silvester's discovery of the Empire of the Rising Sun took place in several stages. From a very young age, the photographer was already interested in Zen Buddhism and Japanese culture. Then, it was the images brought back in 1951 by the Swiss journalist Werner Bischof that struck him. The desire to go there was slowly growing inside him and destiny held out its arms to him: in 1968, a supermarket chain offered him the project of taking photos in Japan to put them in chocolate bars to build customer loyalty. Hans Silvester was asked to produce a "chocolate" book on the theme of Japan. He stayed there for a year and was able to experience the country intensively. Outside the cities, the photographer likes to say that he was an object of curiosity. Not being able to speak the language, he carried around little papers written in Japanese in his pockets, on which were written, among other things, "I am as clean as a Japanese" when negotiating room and board. In the space of a year, Hans Silvester was able to capture the children of Tokyo in a very modern and graphic setting, as well as the Zen temples of Ryoanji and the helmeted demonstrations of Japanese students in 1968.

Retour De Voyage is enchanted by this photograph, as are all colourists who can see the shades of vermilion in it. The graphic beauty of the infinitely closing structures and the shimmering hues lend a singular atmosphere to this photograph. 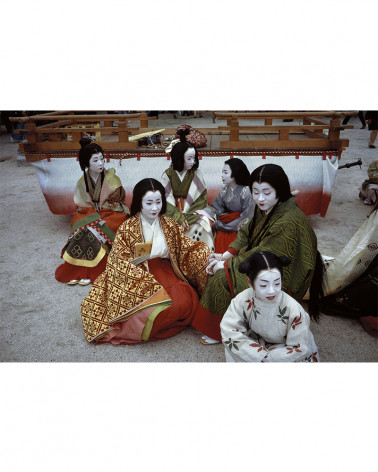